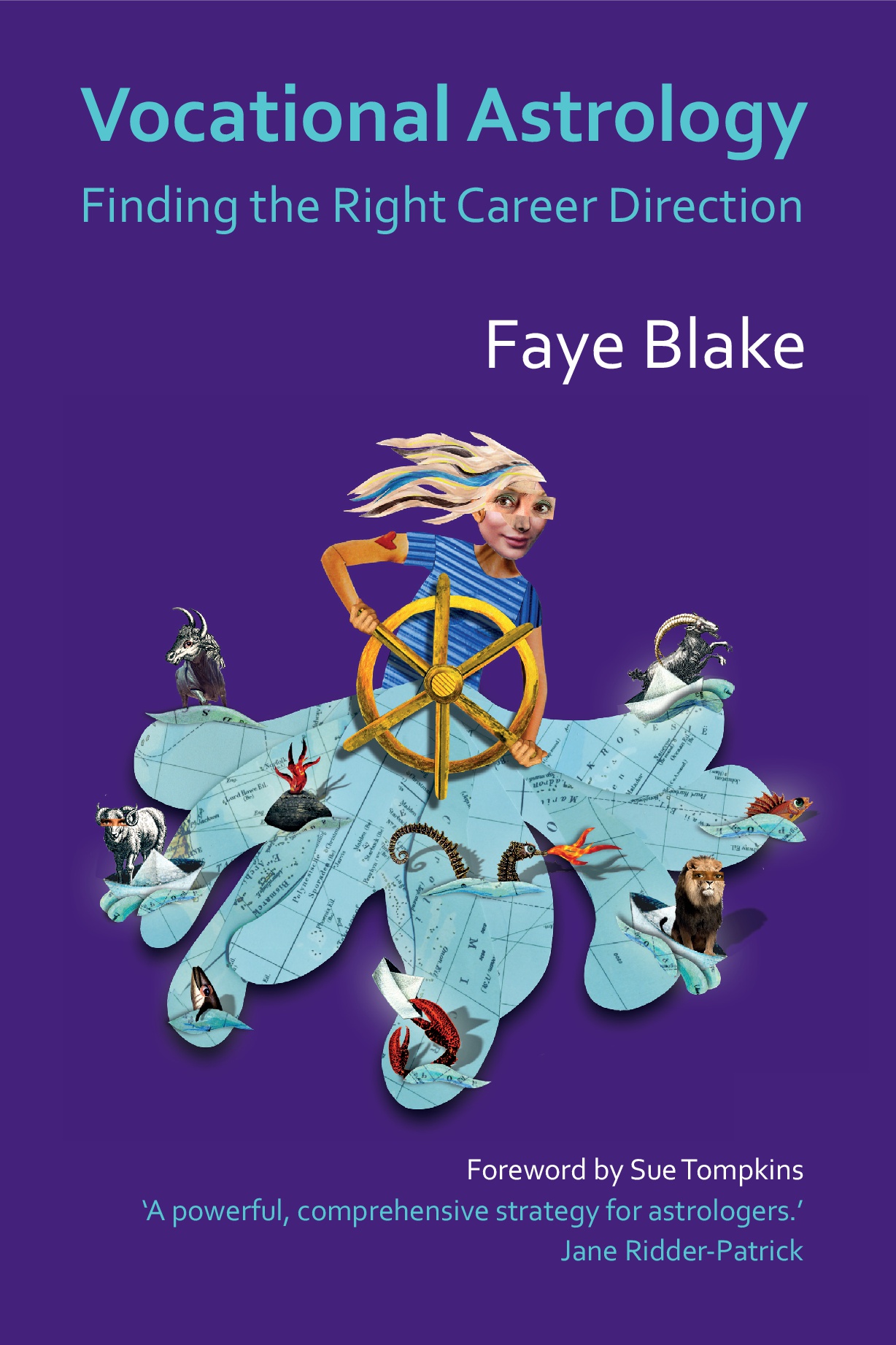 Faye Blake’s book Vocational Astrology on finding your calling, profession or new job, is an expert guide for the astrologically minded person seeking their best work-solution. Combining the utility of a technical manual with the insight of a gifted astrologer this book marries the arcane art with completely practical solutions. If you are seeking a new adventure in the world of career, check Faye’s site www.fayeblake.nl for general astrology and www.fayesbook.co.uk for more on this book specifically Have you ever read through a medical dictionary and come away knowing that you suffer from cholera, diphtheria, and the Black Death? This book is an astrological study of psychopathology and offers an equivalent experience. Perhaps it should be issued with a disclaimer: “If you think the whole world is against you, read this book to discover that the outer planets have joined in too.”

With an acute astro-psych analysis of the natal charts of some of the psychopaths of recent history up to and including Hitler and colleagues, reading this book is a bit like watching Silence of the Lambs, only to realize that what you are being offered is less an opportunity to observe afflicted planetary constellations and their possible consequences in human life at a distance, but more an acutely uncompromising mirror that informs you that you too may carry the seeds of unconscious compulsion.

As ever consciousness is the $64k question. How an individual will respond to Moon-Chiron aspects (for example, among others) cannot be deduced from the chart. What can be seen in 20/20 psych clarity is how they did, and how they might be likely to. The chart itself is just a snapshot of a moment in time, applying equally to the nativity of a bedbug, a badger or a bad-actor. That said, we are shown here that there are some charts which offer greater challenge/opportunity than others in this context.

As with many of the books published by the CPA (Centre for Psychological Astrology, founded by Liz Greene) which are transcriptions of seminars, there are a few small typos in the text, a feature which is becoming more common in published literature everywhere. Juxtaposed against this small detail, is the extraordinarily impressive technical mastery of chart analysis and psychological insight displayed by Ms Greene. Kudos too, to those individuals attending the seminar who were brave and honest enough to exhibit their charts to her scrutiny.

What one comes away with after this immersion in case-study is the realization that personal choice, to the extent that one is free to make it, is incredibly important in the drama we call life, and that there but for grace … One concludes again, with Shakespeare: “The fault dear Brutus is not in our stars, but in ourselves, …”

Having spent roughly a year looking at the astrological correspondences in the tarot, it’s time to recommend this book. For a clear and user-friendly explanation you couldn’t do better.  The author explains the common practice of ascribing the seven planets of the ancient world (Moon thru Saturn) to the cards 2 thru 10 of the 4 suits of the Minor Arcana. The Majors are also ascribed correspondences by sign or by planet. It’s worth saying that the match is slightly out of phase, but no less interesting because of it! The music of the spheres has puzzled some of the best minds in history. If you love mystical arithmetic, this is one to read.

You know how the Sun is 400 times larger than the Moon, right? And the Moon is 400 times closer to the Earth than the Sun? And that is what makes an exact total eclipse possible. Ah, but did you know that the relative orbital periods of Venus and the Earth describe the same relationships found in Fibonacci numbers and the Golden Section? These and other fun facts abound in this slim volume. Amaze your friends at dinner parties! This is a user-friendly, easy to read, yet substantial book on aspects in the astrological chart. Written in a clear style, it is packed with insight and information on the way the planets talk to each other (or don’t). In a tarot reading it’s often the way one card and what it tells us relates to another. If you’re interested in exploring relationship in the chart or in a tarot spread this is a great book which will expand your approach. www.suetompkins.com For a stylish, fashionable, and fun take, card by card. Sasha Graham’s Tarot Diva is the place to go. A media-savvy practitioner with a finger on the pulse, she guides, slides, parties through the deck with her own unique spin.

See my interview with Sasha here. Thorsons publishers created a series called ‘Principles’. Slim volumes on subjects from acupuncture to zen and everything in between. They are excellent introductions.

Charles and Suzi Harvey wrote this one on astrology and at twice the usual length it is not quite so slim. There is clear and concise material on planets, aspects, signs and houses as you would expect in an introductory volume. In the early pages of the book there is also some interesting writing on the current ‘scientific’ view of astrology.

It was Charles Harvey’s passion to restore astrology’s reputation and offer the immense benefits to humanity that would flow if the subject were considered without prejudice, and better understood. This book has about the drabbest possible cover. Maybe this is deliberate to dissuade merely casual interest. The volume is dense with information that the astrologer could usefully get to grips with. However, if terms like; ‘ecliptic’ and ‘mean declination’ are new to you then I advise taking it slow and in bite-size nuggets.

I’ve always been fascinated by solar systemic motion and the stats of the planets – distance from the Sun, period of axial spin, orbit and speed. Did you know for example, that on Venus you could find a sunset in the East? We’re told that the universe is ‘x’ billion years old or perhaps it’s ‘n’. Here is a book that deals with a smaller cycle, but because it’s astrological time, none of us will be here to see it to completion – well not this time round.

Cast adrift in the trackless wastes of time, I find it comforting to have some reasonable numbers attached with supporting arguments. In this case 24,000 years. This, along with the very plausible hypothesis that our Sun is part of a binary system and therefore in a pattern of orbital repeat, carries some fascinating implications.

Best of all, in these very troubled times, is the assertion that we are at the beginning of a large ascending cycle. (One hopes)

The astrology here is Vedic (not Western), derived from the work of Sri Yukteshwar and the authors are followers of Yogananda whose own book ‘Autobiography of a Yogi’ gave me bliss when I read it. The Only Way to Learn Astrology. The only thing to criticize about this book is the title (my italics). Er, excuse me but astrology is a broad study and there is more than one way to learn it. Yes, well, I bet the authors knew that.

Other than that the book is terrific. First published in 1980, for a clear step by step exposition of the basics and a comprehensive compendium of ‘cookbook’ interpretations of planets in sign, in house, and by aspect, you’d go a long way to find a more instructive and well-written volume than this.

Based on a teaching series the authors offered over many years, there are quizzes and sample delineations. Master the material in this volume alone (there are 6) and it will give you excellent skills in chart interpretation. Saturn: A New Look at an Old Devil. When this book was first published in the 1970s it became a best-seller, it really hit the zeitgeist. People would talk about about it at dinner parties in London whilst looking wise with new insight. The message of the book was truly exciting, i.e. that Saturn could be looked at in a positive – or at least a creative – light. In traditional astrology Saturn was the bad guy, the greater malefic, but now suddenly the slow lessons of Saturn; patience, persistence, discipline, could perhaps transform our natures if only we could master our fear, our isolation, our failures and all manner of obstacles internal and external. Saturn has gone around the Sun at least a turn and a half since the book first came out. Liz Greene went on to found the CPA and inspire a psychological perspective. If you have a serious interest it’s worth reading anything she has written. From the Faculty of Astrological Studies a sorority of distinguished ladies give accounts of their journeys into the craft. From the vocational call to the developing fascination to the near-obsession. From the early vision to the extensive revision as insight and understanding opens up. From ethical considerations of practice with clients, to practical considerations of establishing and running a practice. There is historical perspective too. Less technical content than most books on the subject and much more personal narrative. Recommended to anyone who wants an anwer to the question: “What’s it like being an astrologer?” A warm, engaging and easy read. Be warned though, if you get interested it may change your life! The Faculty of Astrological Studies Planets, Signs and Houses are the big three in the foundational study of astrology. Computed either by time or by space – two enormous variables – there are at least a dozen varying systems in current use. This book gets at the principles behind the ascription of parts-of-life to the action of the planets, and includes a comprehensive description of each planet and sign in each house.  The late Howard Sasportas was widely admired and held in considerable affection by his colleagues and students. The Kindle edition includes a number of touching memoirs and tributes to him. His easy writing style and compassionate sense of humor is evident throughout.